In conjunction with the CSFF Blog Tour, I received a free copy of this book from the publisher.

The February CSFF Blog tour is highlighting Bill Myers’ The God Hater, published by Howard Books.  Here’s our review:
Expect to be drawn into a page-turning suspense story that will also make you think as you read the pages of Bill Myers’ novel, The God Hater.
We meet the feisty atheist, Nicholas Mackenzie, in the opening chapter.  He’s a philosophy professor who is quick to malign religion, willingly debating Christians and shredding their arguments.
But things change when McKenzie’s brother, Travis, asks for his help with a computer-generated world he has created.  Travis needs a philosophy to guide the civilizations in the computer program.
Once the reader enters this alternate world, things become more and more intriguing.  Myers is able to lay out apologetic arguments without bogging down the story.  Instead, we’re drawn into the story while engaging with ideas about creation and the Creator.
We appreciate that Nicholas is not a cardboard evil atheist but Myers, in making him a sympathetic character, addresses the issues of reason vs. faith in a more satisfying way.  We don’t see just a one-sided argument but rather a story that impacts people.
The God Hater is an excellent novel that we highly recommend.  You can look at the book here.  Visit the author’s web site here.  And you can connect with Bill Myers on Facebook here.
The following are participants in the CSFF Blog Tour.  Please visit their sites as well for further thoughts about The God Hater.
Noah Arsenault
Red Bissell
Thomas Clayton Booher
Keanan Brand
Rachel Briard
Beckie Burnham
Morgan L. Busse
Carol Bruce Collett
Valerie Comer
Karri Compton
CSFF Blog Tour
April Erwin
Amber French
Andrea Graham
Tori Greene
Katie Hart
Ryan Heart
Joleen Howell
Bruce Hennigan
Becky Jesse
Cris Jesse
Becca Johnson
Jason Joyner
Carol Keen
Emily LaVigne
Shannon McDermott
Matt Mikalatos
Rebecca LuElla Miller
Mirtika
MollyBuuklvr81
John W. Otte
Sarah Sawyer
Chawna Schroeder
Andrea Schultz
Tammy Shelnut
Kathleen Smith
James Somers
Donna Swanson
Jessica Thomas
Steve Trower
Fred Warren
Dona Watson
Nicole White
Dave Wilson 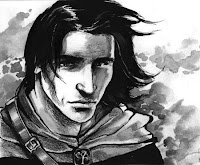 Faramir’s view is of winning very different. To him, how one achieves the goal is just as important, perhaps even more important, than the goal itself. Dickerson writes in Following Gandalf that,

“he would rather suffer military defeat than do evil to gain a military victory” (p. 78)

“I would not take this thing, if it lay by the highway. Not if Minas Tirith were falling in ruin and I alone could save her, so, using the weapon of the Dark Lord for her good and glory. No, I do not wish for such triumphs” (p. 314)

We see this willingness to do the right thing regardless of the consequences when his father confronts him on his choice to let the Ring go. His father tells him,

“Ever your desire is to appear lordly and generous as a king of old, gracious, gentle,That may be well in times of peace, but in desperate hours gentleness may be repaid with death” (Return of the King p.86).

Faramir’s answer is simple, yet powerful: “So be it.”

While Boromir is willing to break some rules to get a military advantage, his younger brother is not.

Posted by Rebecca at 5:46 PM No comments:

Now we get into the second place where the brothers differ: how do you win?

For Boromir, the military victory is the greatest prize. It doesn’t matter how one wins, just as long as one does. Boromor saw the Ring as a means to an end. Yes, it may be evil, but it would be right to use it if it accomplished a greater good. He is against the idea of destroying it. He tells the Council,

“Valor needs first strength, and then a weapon. Let the Ring be your weapon, if it has such power as you say. Take it and go forth in victory!” (Fellowship p. 300)

The means isn’t important; the victory at the end is. The goal is important, not how one achieves the goal. Dickerson writes in his book Following Gandalf,

“For Boromir, what matters is military victory. If one has to be ruthless to win, one should be ruthless” (p. 61)

Boromir is willing to break some rules if it gives him a military advantage. If he needs to steal an evil ring to win, then fine.

Posted by Rebecca at 5:34 PM No comments:

Unlike his older brother, Faramir doesn’t love battle. He is a warrior and willing to fight, but not for the sake of glory. He tells Frodo in the Two Towers,

“I do not slay man or beast needlessly, and not gladly even when it is needed” (p. 307)

“I do not love the bright sword for its sharpness, nor the arrow for its swiftness, nor the warrior for his glory (Two Towers p. 314).

For Faramir, his life isn’t consumed by the glory of a warrior. He is interested in other things besides battle. Duriez points out that he loves music and old songs and tales (The Handbook p. 93)

So why does he fight? What is his motivation? He fights to protect those behind him. He tells Frodo,

“I love that which they {sword, arrow, warrior} defend: the city of the Men of Numenor” (Two Towers p. 314)

Faramir fights to protect others, not to bring military glory to himself.

The Ring offers a military advantage. If one want military success, using the Ring is very tempting. This is a big reason Boromir tries to obtain the Ring; he can win more military victories. When dreaming about owning the Ring, he says,

“The Ring would give me power of command. How I would drive the hosts of Mordor, and all men would flock to my banner!” (Fellowship p.133)

When reflecting on Boromir’s fall, Faramir says that if the Ring were an object that gave military advantages, Boromir might have desired it and be allured by it since he is proud, fearless, and anxious for the victory of Minas Tirith and his own glory. Since Boromir is more concerned about military victory, the Ring has a stronger pull on him than Faramir.

Posted by Rebecca at 8:12 PM No comments:

The first difference is how the brothers view war and battle. Both men are great warriors, and perfectly able to fight and lead men into battle. Yet their motives and how they view it are very different.

For Boromir, battle is where glory is to be earned. Matthew Dickerson, speaker and teacher, writes,

“He sees war and battle as opportunities for personal glory and, in particular, the chief place where glory is to be earned” (Following Gandalf p. 60)

Boromir loves the glory of battle and sees it as the greatest honor a man can have. For him, the military victory is the greatest prize. As Foster points out in his book A Guild to Middle-Earth,

“Boromir cared little for anything save arms and battle” (p. 35)

For him, the glory of battle is very important. It is his motive to fight: to win glory.

Posted by Rebecca at 1:50 PM No comments: 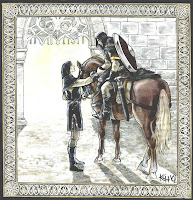 Boromir and Faramir are characters in by J.R.R. Tolkien. At different points in the books, the brothers meet Frodo and have the opportunity to claim the Ring.
One would think their reaction would be similar. After all, they do have a lot in common. They grow up in the same environment and both heard the opinion of their father, who wants the Ring.
Both are men of Gondo and were great military leaders and perfectly able to fight and lead men into battle. One would think their reaction would be the same, and yet when given the same chance to take the Ring, they react opposite of each other.
Boromir tries to steal the Ring, but Faramir refuses to take it. He wants nothing to do with the Ring, and helps send it away to be destroyed. How can these brothers react so differently? On the surface, they appear similar, but when we start digging deeper into the story, we begin to see major variations in their character.
Written by Becky Brasby

Posted by Rebecca at 6:00 AM No comments: